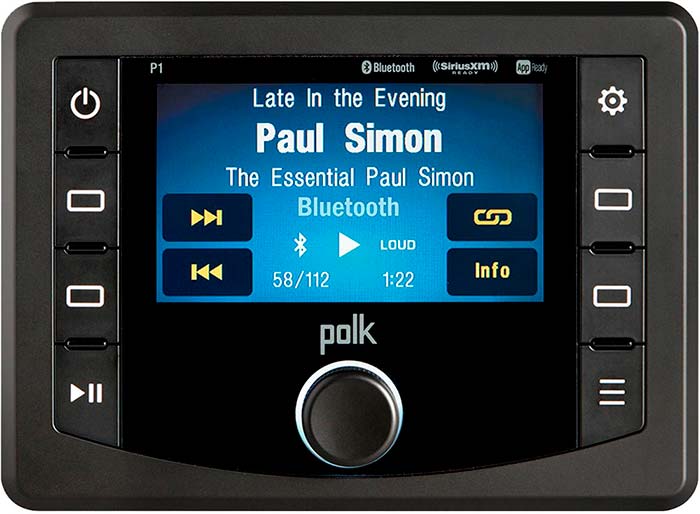 Tips for Installing a Stereo System in Your Boat

Even a brand new boat may not come with all the bells and whistles for which you are hoping.

Fortunately, it is easy enough to add on accessories, from tubing and water skiing gear to a Bluetooth marine stereo. Installing a stereo system in a boat can be a bit of a challenge. Not only is the boat a wet environment where electronic equipment can become damaged and connections corroded, but the fiberglass body of the boat is not the strongest material on which to mount. Care must be taken when mounting a stereo to ensure that the mounts can handle the pounding of waves without the shock causing fasteners to loosen in their holes, and the stereo to fall off of the boat wall.

Although it is possible to use a standard automotive stereo system in a boat, this is not recommended. Marine stereo systems are designed to be much more water-resistant than standard automotive ones. In fact, there is a watertight seal on marine stereos. In addition, these units are designed for the constant rocking and pounding of a boat’s movement, providing shock protection so that tunes can play out even in choppy weather. Manufacturers, such as Jensen Marine and Polk Ultramarine, make stereos that are specifically designed for this use.

These items are sold at brick-and-mortar stores, including marine audio shops, as well as from online marine audio vendors and online marketplaces, such as Marine Audio.

Like the stereo systems themselves, marine stereo unit components are designed to function in the wet environment of a boat without incurring damage. This is not to say that these accessories can or should be fully submerged without damage, but rather, that they are able to withstand the spray and moisture of being on the open water.

Regular stereo components are not suitable for marine environments, and are most likely to become damaged relatively quickly in a boating excursion. The tips below outline instructions for how to mount the stereo and speakers, as well as how to protect them when you are out on the water.

There are two main areas in boats where the stereo head unit is mounted. The first is in the dashboard area, which is similar to the dash of a car. The second is in the cabin on boats that are large enough to have a cabin. In both cases, the same basic rules should be taken into consideration.

Marine stereo systems are designed for mounting horizontally, not vertically. While many may work in a vertical position. This can cause serious damage to both the CD and the head.

Manufacturers of marine stereos state that their units are designed to maintain the CD at up to a 30-degree angle. However, one must consider the rocking of the boat as part of that angle. Therefore, a mounting angle of up to 20 degrees could still be considered acceptable, allowing another 10 degrees of angle for any boat movement.

Tip 2: Protect the Stereo from the Water

While it is best to have the back of the unit covered once it is mounted, access to the back is important while mounting. When selecting a mounting location, this should be kept in mind; the installer should select a location that allows access to the back of the unit for mounting, even if this requires removing a panel or opening a compartment. Also, keep in mind where the input port is, since you want that to be easily accessible. 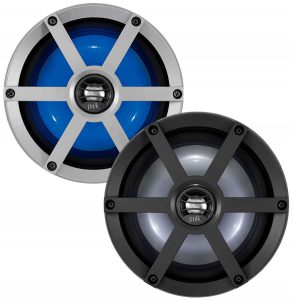 A stereo unit can be fairly heavy, weighing up to several pounds. Most boats are made of thin fiberglass. Most marine stereos come with installation guides that can help the user decide where to mount the unit. If the stereo unit is being mounted into a fiberglass panel, the panel may need to be reinforced, as most interior fiberglass panels are thin, about 0.13- to 0.25-inch thick. Failure to reinforce causes the fiberglass panel to eventually break from the shock of the stereo bouncing up and down.

In addition to the front mounting of the stereo, most stereo units have a mounting stud attached to the back of the case. This should be used in all marine applications. A metal strap, such as plumber’s tape, should be attached to this stud and secured to a solid mounting location above the stereo unit.

Mounting speakers in a boat is much different than mounting them in a car, although the two scenarios may seem similar. The major difference is not the speakers themselves or the way they are mounted, but the acoustics of the boat. In a home or car, the sound from the speakers bounces off the walls, returning to the ears of the listeners. While this happens in the cabin of a boat as well, the sound does not reflect back in the cockpit or on deck. This means that speaker placement is much more important on a boat.

Speakers come in two basic styles, each of which has myriad different configurations. These two styles are described in the chart below.

For best results when mounting flush-mounted speakers, some space is needed for air movement behind the speaker. At the same time, the area in which the speaker is mounted needs to be totally enclosed, with no openings to allow air in or out of the space.

Speakers only provide sound to the areas in front of them, so a boater who plans to listen to music while at sea should consider where he or she plans to spend time. While a speaker normally throws out a 120-degree cone of sound, the loudest and clearest sound is directly to the front of the speaker. This means that the speakers need to be located so that they are pointing as directly as possible at the places where the passengers are seated.

We are accustomed to hearing things coming at us from both sides. When we listen to a stereo at home or in the car, we hear sound from both sides, even if both speakers are mounted to one side of us. The sound coming from those speakers bounces off the opposite wall, providing sound to the other ear.

When selecting speaker locations, placement should be done so that the people listening are able to hear the sound from both sides of their head. Using one stereo channel for the front of the boat and the other for the back provides an unnatural sound that does not sound right to anyone. It is better to put the speakers to the right and left sides, allowing people sitting in the middle area of the boat to hear the two stereo channels through different ears.

While marine speakers have grilles that provide some degree of protection from water spray, these speakers are not waterproof. Care should be taken to locate the speakers in such a way as to keep them out of the direct path of splashing and spray.

Deciding How Many Speakers to Use

If a 5.1 surround sound stereo system is purchased, this provides a way of providing sound throughout the boat’s cockpit. However, extra speakers beyond the normal two can also be attached to a regular stereo system.

The secret to mounting several speakers to a standard stereo is in how they are wired together. Speakers must be added in pairs so that there are as many right speakers as there are left speakers. The speakers on each side may be wired together in one of two ways to create the best possible impedance.

Impedance is an important part of determining how well a stereo system operates and how much volume it produces. The stereo itself may require a particular impedance, although it is often built to work with a number of different impedances. This is stated in ohms, which is represented by the Greek letter omega. Regardless of whether the stereo is designed for one particular impedance or works with different impedances, the higher the impedance is, the lower the volume is that it produces.

Based on the information presented above, two 8-ohm speakers wired in serial equals 16 ohms, which is too much for most stereo systems. It would be better to use two 4-ohm speakers. However, those same 2-ohm speakers connected in parallel would have a total impedance of only 4 ohms. With this wiring configuration, they would produce more volume.

When wiring a stereo system in a boat, the first thing that must be kept in mind is that the boat is probably not metal, but fiberglass, which is an electrical insulator. Therefore, grounds cannot be connected to the vehicle body as they are in a car. They need to be run to a ground lug, where they are connected to other ground wires.

The second problem with wiring on a boat is that the atmosphere is highly corrosive, especially if the boat is used on salt water. Wire is usually made of copper, which corrodes easily. To prevent corrosion, no wires can be exposed to the air. This means that all connections must be covered by either heat-shrink tubing or liquid electrical tape. Regular electrical tape is not sufficient, as it usually has areas where air can get through.

Marine-grade wire is tinned. This means that the entire copper wire is coated with a thin plating of solder, which is made of a combination of tin and lead. This greatly reduces the risk of corrosion, as tin and lead are not as corrosive as copper. However, these connections still need to be covered with heat-shrink tubing or liquid electrical tape to protect them.

Tip 6: Use Hardware That Does Not Corrode

Whenever possible, use stainless steel mounting hardware on a boat. Most hardware is made of steel, which rusts. Stainless steel hardware is essentially rustproof, although it is possible to make it rust with enough salt water.

If it is not possible to access the area behind the panel, in order to install nuts, rivet nuts, or “rivnuts,” can be used. Rivnuts are a type of pop rivet, which is internally threaded to be used as a nut. When they are installed, the rivnut collapses, pressing down on the material from both sides, sandwiching it between the flange of the rivnut and the back part of the rivnut.

Marine Audio offers a vast selection of stereo systems that can be installed on a boat. You can find these systems on by conducting a keyword search for “marine stereo systems” ” or “boat audio” using the search bar on any explorer web.

While mounting a stereo system in a boat may seem much like mounting it in a car, there are significant differences. Most of these differences are caused by the boat being fiberglass and the problems that moisture can cause for the components. However, with proper components and installation, these problems can be minimized.

Speaker placement is extremely critical when mounting a stereo system in a boat. The boat does not reflect the sound back to the listeners’ ears as a car body does. Rather, the majority of the sound is lost into the open air. Therefore, speakers need to be placed so that they point directly toward the listeners. While speakers produce a 120-degree sound cone, the loudest sound is directly in front of the speaker.

Wiring is another area of concern. Copper wires corrode when exposed to moisture, especially when said moisture contains salt. Marine wiring is tin-plated to help reduce corrosion risk. Even so, all connections should be fully covered by heat-shrink tubing or liquid electrical tape. The best electrical connections are soldered. These do not fail, even when corroded.

Finally, hardware selection is important, both to reduce the risk of corrosion and to prevent damage to the boat’s fiberglass hull. Stainless steel hardware should be used wherever possible, as it does not rust like other hardware. Sheet metal and wood screws can strip out easily in fiberglass. Instead, machine screws with nuts should be used.